THE PUPPY AND THE SNAKE - 49AC

THE PUPPY AND THE SNAKE
Issued the 12th of the Earthshine - 49 A.C. 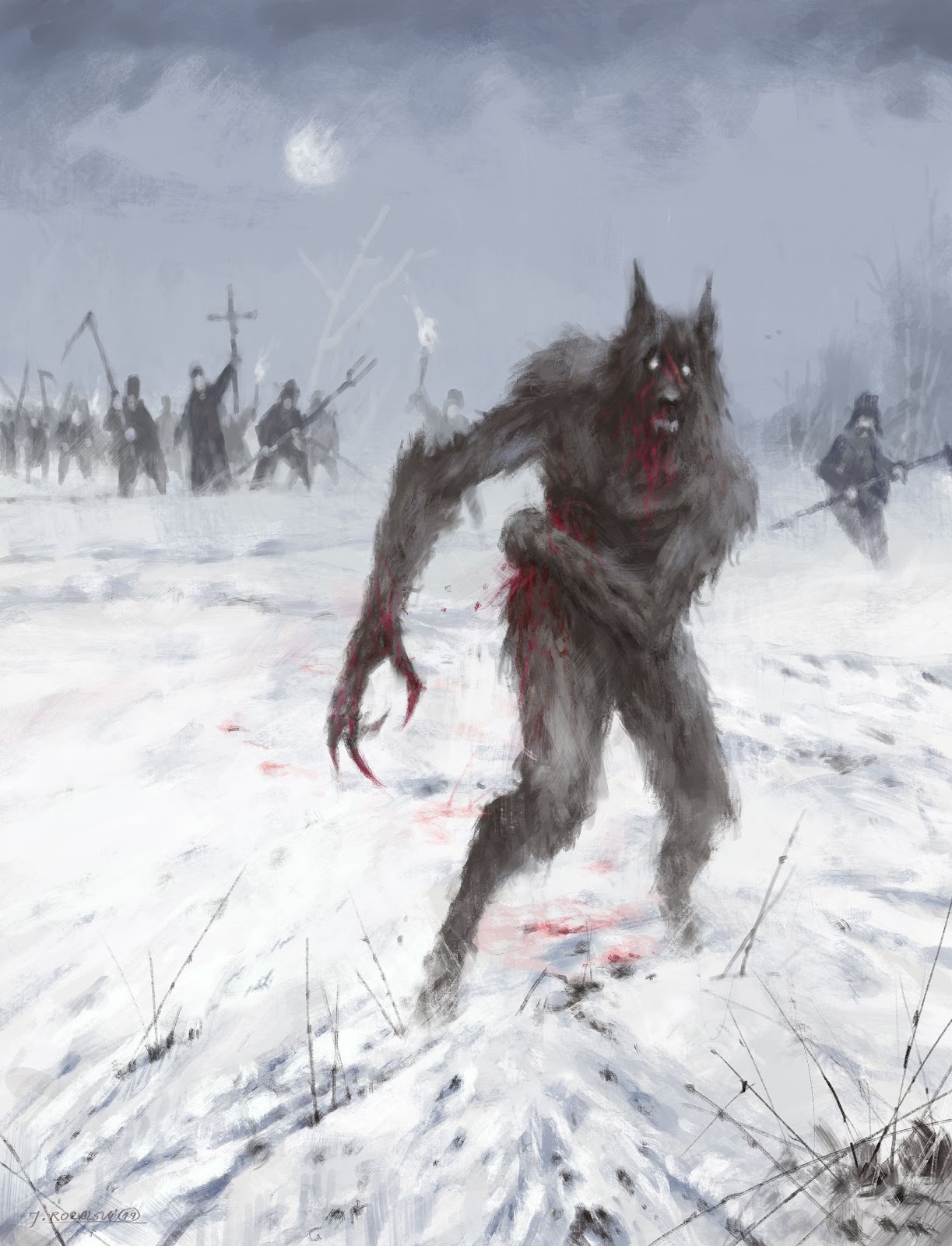 ​
A man’s most loyal companion, perhaps its best friend; many titles are given to the furry creatures which roam within Enarion’s cities. However, it has not gone unnoticed that some despicable amalgamation of man and wolf roams the plains of our continent. The very existence of such an animal is blasphemous for it surpasses the boundaries of Mytra’s reality and dirties the juniper grass of Syra. For these reasons it has been decided that the rat-like species named ‘Wolfwalker’ has been labelled a threat to our sunblessed Kingdom and citizenry thereof. Hunting parties will be sent to track these puppies of the night - in a means to leave them extinct. Bring us the heads of the creatures and you will be handsomely rewarded.

The wolf by the name of ‘Rookie’ shall be exempt from this ruling, for it shall hunt with us to wipe this degenerate species off our sacred ground. This twisted being of fur-clad flesh shall be hunted down endlessly by the denizens of Calendale and her expansive realms. May the Snake of Westholm feast upon their venomous hide in an attempt to quench its insatiable hunger.

Dain laughed in the confines of his home at the odd and sadistic missive before crumbling it up and tossing it aside "Your little Rookie is disobeying Evkarik's most basic rule. Stay loyal to the pack, and serve no other higher being. She will soon lose her blessing. So no worries."

Marsaili Ròsach peers over the declaration, letting out nothing but a simple sigh as she continues on. Foolish - and this was defnitely the type of foolishness to get someone killed.

Clarence prepares his silver cleaver by covering it with garlic for a hunt. Completely naive of the fact that wolf-walkers are unaffected by both silver and garlic.

Eadric was horrified that such dreadful creatures could hide in plain sight!
Last edited: Jun 8, 2021

Alexandra thought this was a weirdly named kids book.

Somewhere in the eastern mountains a Vlachian within his hunting cabin burst into laughter. He sets his scabbards down by the door and opens a closet filled with herbs. He grabs one and stares longingly at those blue, intoxicating caps. "What a beautiful night this is. At sunrise the snakes awake, the hawk hangs high and the hunters have become the hunted." another cackle befell the man. "I'll take pride in flaying the damned turnskins."
A

Felicia never really wanted to know what Calendale was up to, not after what she had been through. But to see that they're yet again going around slaughtering yet another group of people for merely existing, she just lets out a heavy sigh. "I wonder if those fools will ever know peace and acceptance." She says as she finishes reading it, heading back home.

Viggo pulls a missive from a wall close to his home, not bothering to read it just yet however he let a heavy sigh escape him as he read the title, mumbling softly to himself as he entered his home, closing the door behind him. "This should be a good read." The man let out a very faint chuckle, it was clear his mumbling was sarcastic. As he sat down at his kitchen table, he places the missive down and begins reading. As the man finished he brought his right hand up, gripping the bridge of his nose as he sighed. "Are 'ye 'fukin kidding me?" His right hand now fell back to his side, as a look of disbelieve formed on his face. "The West is getting desperate and are showing their truest colours. They choose to hunt those blessed by a spirit of life while showing no thought or care towards the vampires that plague the lands, those that are given their powers by a spirit of death? 'Fer shame. I suppose the undead attacks must 'ave succeeded in taking over the great city of Westholm. 'Fer no one in their right mind would choose 'te hunt those of life while those of death are free 'te roam without retribution." The man sighs, shaking his head still in disbelieve. He stood, picking up the missive as he did so and tossed it within the furnace of his home, letting it burn. He stood there for a few moments as if lost in a trance before small footsteps from behind him broke him from such. He turned, a smile growing as his daughter came up behind him. He picked the young girl up, sitting her on his shoulder. "Let's go find mom, da?"

Vanikath approves of the purge, having heard that Wolfwalkers pee and poo on the street to mark their territory - even whilst in their regular form. Disgusting!

Elaine thinks dog people are weird! "How can one survive without opposable thumbs?" The girl asks aloud.

Jayce leaves a bowl of dog-food outside his door.

Reading the title, she sighed " I hope your wings are strong, you vulture. You will be circling for quite some time. " she laughed before looking to her husband and smiling. "Let's see if they can go a hunt without slaughtering another 5 men hm?"

C4ndyStripper said:
Reading the title, she sighed " I hope your wings are strong, you vulture. You will be circling for quite some time. " she laughed before looking to her husband and smiling. "Let's see if they can go a hunt without slaughtering another 5 men hm?"
Click to expand...

He would laugh with his wife. "These calendale folk..." He lets out another chuckle "Theses blood thirsty people have yet to see who the real monsters are in Enarion. They should look at themselves before going after others."
OP

Brokenhelix said:
Jayce leaves a bowl of dog-food outside his door.
Click to expand...

Kaz A. Isilros eyed the missive. "Wierd name..." He walks in his home, putting it on his desk and started to read it, slightly laughing "I will enjoy seeing their mangled corpses. May 'Rookie' and Calendale fall to fang and claw." He throws the missive away as it gets swept away in the cool morning breeze that sweeps through Glarenydd.

Zoya nudged two little ones in front of her, the missive in hand as she eyed it over. Crouching slightly, she read the words slowly to the toddlers, hoping to teach them that fear could be disguised as hatred, before finishing with a final statement. "These statements are false. If there are any creatures you should be worried about, it's those who feast on blood from the west, whether they be vampires... or men of its kingdoms." Satisfied with the expression of disgust followed by the teasing giggles of her children, she set the missive in the fireplace, muttering a small prayer beneath her breath—not for the wolf-walkers she knew of, but for the family of the men off to hunt them. In her opinion, it was truly a shame that they had raised such imbeciles.

Lephilia sighs as she places the missive down, recalling back when they had written something just as awful and hateful as the one about elven kind.. She knew not of any report of the wolfwalkers causing harm; not compared to other horrors that remained roaming their realm. "Do they wish to rid every soul that is more unique than their own? A hate for the abnormal.."

grandreaper1980 said:
Kaz A. Isilros eyed the missive. "Wierd name..." He walks in his home, putting it on his desk and started to read it, slightly laughing "I will enjoy seeing their mangled corpses. May 'Rookie' and Calendale fall to fang and claw." He throws the missive away as it gets swept away in the cool morning breeze that sweeps through Glarenydd.
Click to expand...

(forgot to add this originally) Asher M. Drakon smiled at the missive "those beasts will taste the might of Calendale! While many will die, these beasts shall be extinct! Ha, I can't wait for father to get a silver blade for me so I can help destroy these creatures!! >:D
You must log in or register to reply here.
Share:
Link

_Tepes
how do i report mages for racism
Today at 4:53 AM 0 replies

Jentos
Can we pretend that airplanes in the night sky are like shooting stars I could really use a wish right now wish right now
Yesterday at 7:33 PM 2 replies

Smmers
where is the player review thread? :/ why are we being excluded????!?
Yesterday at 8:04 AM 1 replies

_Tepes Rumpo _Tepes wrote on Rumpo's profile.
post when
Yesterday at 7:19 AM 2 replies